A History of Recycling 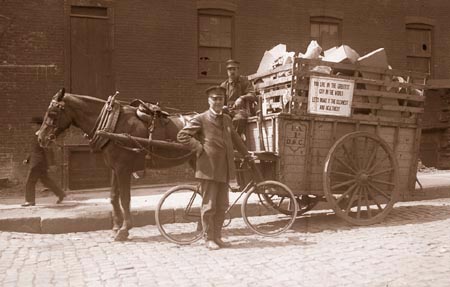 Recycling is not a new concept to humankind. In fact recycling has been around for many years. There is quite a history to the recycling community that is surprisingly unexpected that derives from further back in time. Although in history the items that were recycled are much different from today as they did not have metals, electronics, styrofoam, plastic, and glass. And their recycled uses of their waste is also not the same. Despite the changes in recycling over the years, the sentiment is the same; care for the environment and future posterity.

The first recorded interest in recycling was back in 400 BC. It is the famous Plato who was an advocate of recycling. He wrote about the importance of recycling trying to promote those of his time to make the most of their waste products. And from many archeology discoveries, there is even proof that many early races did their best to reduce their waste. The garbage of ancient civilizations includes broken pottery, ash, broken tools and the occasional leftovers from dinner. Archeologist were able to see from their waste sites, or dumps, that household garbage was reduced over time, which proves they were recycling.

Ash, bones, and pottery might seem impossible to recycle but those items can be reused to make many useful items in turn. Ash, as well as dust, was a key property in making bricks. Another way to use ash is for the soil. It helps soil, especially limestone, to make it possible to grow vegetables year after year I the same plot. Today, recycled ash is used in concrete, making and laying asphalt. Ancient civilizations recycled broken pottery by melting them down and mixing them in new clay to make new pots. Left over bones were used for tools, as knives, and even as ornamental jewelry.

During the 1800's, not all recycling was inspired to save the planet, but instead because of sanitary conditions. The European countries were forced to recycle because there was no structure for waste removal. Another reason for recycling, was due to poverty. But in the case of Benjamin Law, it was business smarts that encouraged him to create the "shoddy" process, or sometimes known as mungo. He discovered this process back in 1813, which was a type of recycling that took old rags fibers and mixed them in with virgin wool. The end result was more usable cloth and the process of shoddy lasted long into the 1900's.

Another type of smart recycling began in the 1800's, recycling beverages. Ireland and Great Britain had companies that encouraged buyers to return the bottles. In some cases there was monetary exchange for returning bottles to their company. The Industrial age also encouraged recycling as there was more demand for affordable wares. This brought about scrap metal as it was cheaper than pure metals such as ore. Scrap metal is pure metals leftovers that are melted down to create a new metal that can be reused or molded into new wares. The railroad business worked solely in buying and selling scrap metal in order to build railroads throughout the United States.

Today recycling is still important. There is a conscious awareness to reduce the carbon footprint of humankind. Due to science and other technological advancements there is more recycling being done. Despite its current popularity, recycling is not a new idea. Ancient civilizations also felt a need to take care of the planet and make the most of their resources. And now it is in your hands to protect the planet. Find out what types of materials can be recycled and become a part of the long history of recycling.